The Australian Energy Market Operator may abandon plans to model a ‘gas led recovery’ scenario as part of its 2022 Integrated System Plan, after a proposal to model the Morrison government’s gas market ambitions vision was widely panned by key energy market stakeholders as being unrealistic.

In briefing materials distributed to energy market stakeholders ahead of a workshop on Wednesday, and seen by RenewEconomy, AEMO suggests it will instead model a “zero net emissions” scenario as part of the next edition of the Integrated System Plan, its 20-year planning blueprint, effectively replacing the abandoned ‘gas led’ scenario.

The net-zero emissions scenario will be modelled alongside scenarios based on the ‘current trajectory’ of the energy market, a sustainable growth pathway and an ‘export superpower’ scenario which assumes a massive ramp up of an Australian green hydrogen export industry and policies designed to meet the 1.5°C target.

AEMO’s initial plans to include a ‘gas led recovery’ scenario in the next iteration of the ISP highlighted the influence the Morrison government has attempted to exert on energy market planners in support of a greater focus on the gas industry.

But the decision to abandon the ‘gas led recovery’ scenario is an effective repudiation – not just of the Morrison government’s push to support the gas industry in the wake of the Covid-19 pandemic, but also Labor’s newly revealed plan to also support gas and carbon capture and storage as part of its energy policy.

The abandoned scenario was based on assumptions that the Morrison government would deliver on its flagged interventions into the energy market to boost the development of new gas resources, as well as actively funding further development of carbon capture and storage technologies.

“The Gas-led Recovery scenario reflects a world of targeted stimulus to aid the COVID-19 economic recovery, with low gas prices lowering consumer energy costs in the next decade. In the long-term, reductions in the cost of carbon capture and storage (CCS) provides further technology alternatives,” AEMO’s description of the ‘gas led recovery’ scenario said.

The scenario incorporated assumptions that future gas prices would be lower than AEMO’s projections otherwise suggest, as well as assuming the cost of energy storage technologies would fall at a slower rate than is currently being achieved.

“Any work building on the IASR needs to factor in this inherent volatility, including extreme short term spikes and crashes which will affect the economics of gas in the NEM. The Operator should consider alternative means to model gas prices that factor in the effects of this volatility.”

“The diversified technology scenario that was proposed for the Australian Energy Market Operator’s next Integrated System Plan was literally the federal government’s unpopular and unrealistic gas-fired recovery by another name. This fossil-fueled fantasy has no role to play in a serious assessment of what is needed in Australia’s largest grid,” Baxter said. “The last ISP clearly showed that Australia does not need any new gas. That hasn’t, and will not change.

“It’s brilliant to see AEMO step right back from the proposed scenario after it was rightly panned as unrealistic and a risk to the integrity of the ISP and so a risk to the future of the grid. Gas has already lost the battle in the electricity sector and chasing new polluting and unnecessary gas will only lead to higher bills and higher emissions risking Australian lives and livelihoods.”

AEMO would instead model a full scenario based on Australia adopting a net zero emissions target for 2050, a target that the Morrison government has refused to commit to. 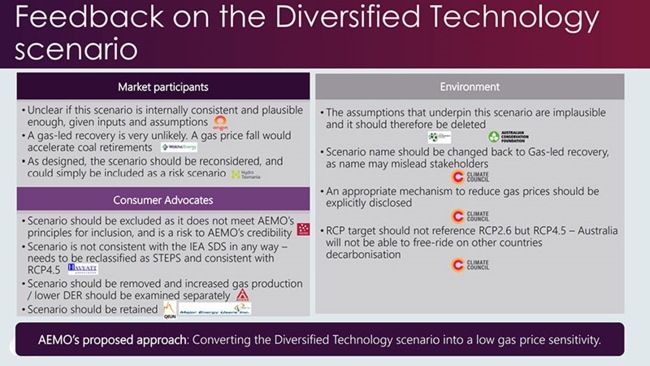 By contrast, around two-thirds of participants said that a scenario that positioned Australia as a “hydrogen superpower” was a useful analysis.

Following early feedback, AEMO subsequently renamed the ‘gas led recovery’ scenario to a ‘diversified technology’ scenario, removing the reference to the Morrison government’s policies and aligned the scenario with CSIRO’s modelling of generation costs and extends to potential improvements in carbon capture and storage costs.

But despite the new name, the scenario was further panned by energy market participants, with AEMO noting that energy giant Origin Energy, which ironically has substantial exposures to the gas market, questioned whether the scenario was “internally consistent” and if it was even “plausible”.

“It is unclear if this scenario is internally consistent and plausible enough given the underlying inputs and assumptions: Based on the cost assumptions in the draft [inputs, assumptions and scenarios report (IASR)], it appears that decarbonisation would still occur primarily through solar with storage rather than carbon capture and storage (CCS) technology as assumed by the scenario, due to relative cost advantages. It is therefore not clear that there can be outcomes where there are higher levels of CCS technology but lower levels of solar generation as assumed by the scenario,” Origin Energy told AEMO.

Research group the Climate Council told AEMO that it was not realistic to assume that gas prices would simply fall and remain lower over the next two decades and that historical volatility in gas prices must be taken into account.

“There is no realistic prospect of stable, consistently low gas prices across the next 20 years on the Australian east coast. While averages may be lower or higher depending on various assumptions, the next 20 years will be defined by price volatility,” the Climate Council said.