Australian energy giant AGL has signed a major deal for battery storage that will see four large-scale batteries – each of 50MW/100MWh – developed in NSW by the Australian renewable energy company Maoneng.

The deal for a total of 200MW/400MWh of battery storage will include a 15-year contract – using innovative swap agreements – that will allow AGL to call on capacity from the batteries at a fixed price.

The batteries are expected to be installed by 2023, in time for the anticipated closure of the ageing Liddell coal-fired generator. It is a massive announcement because it heralds the arrival of battery storage as a cost-competitive option for the main grid.

AGL CEO Brett Redman says the agreement heralds a new era for the company, its customers and for the National Electricity Market (NEM).

“This is the dawn of the battery age and AGL is proud to lead the way,” Redman said in a statement.

“Australia’s energy market is undergoing significant changes and large-scale batteries like these will be pivotal in providing firming capacity in the shift between baseload power and renewables.”

AGL already has a contract with Maoneng to take half the output of the 250MW (DC) – 200MW (AC) Sunraysia solar farm in south-west NSW, which is under construction, and 200MW from other solar plants yet to be built. At least one of the batteries will be located next to the Sunraysia solar farm.

“I’m proud that we are leading the way with this step into batteries, which will be the technology of the future,” Redman said.

“This will present huge benefits for energy customers and the stability of the energy market. In total, this will help support an additional 200MW of dispatchable capacity in New South Wales.”

Redman told an investor presentation on Wednesday that battery storage was likely to follow the path of both wind and solar technologies, which he said had been seen as “funky” and appealing to “rich people and greenies” a decade ago, but were now widespread. 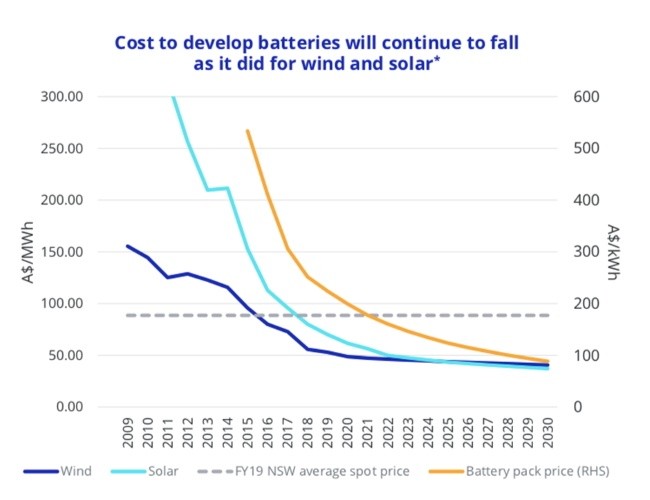 “The Maoneng deal is good first example of something genuinely commercial (at large scale) starting to emerge in the market. It’s not without risk, but it’s a good trade off of risk and return.

“It is the beginning of that change. In 2-3 years time, well see the acceleration in storage that is just beginning to pop up. The next big thing we will be talking about is pumped hydro.”

The company later said more large scale batteries are being planned, in Queensland, NSW, Victoria and South Australia to provide more firming capacity and to help smooth out the emerging “duck curves” being created by the growing impact of solar in all state grids.

AGL already operates the Dalrymple North battery project in South Australia, which has the capacity to offer frequency and ancillary services and also create an energy “island” – along with the neighbouring Wattle Point wind farm and rooftop solar on the Yorke Peninsula in case of outages elsewhere.

That is one of two batteries already operating in South Australia, along with the Tesla big battery at Hornsdale that remains the world’s biggest at 100MW/129MWh. Two new batteries at Lake Bonney wind farm (25MW, 50MWh) and the Lincoln Gap wind farm (10MW, 10MWh) are nearing completion and commissioning.

Another two batteries have been installed in Victoria, at the Gannawarra solar farm and the Ballarat network junction, and another is being built at the Bulgana wind farm. Smaller batteries are also installed in Queensland at Lakeland and Kennedy energy hub (awaiting commissioning).

Maoneng, which also operates the smaller 13MW Mugga Lane solar farm in the ACT, said energy storage will play a critical role in balancing both the energy market and ensuring the stability of the network for Australia’s future.

“Our agreement with AGL will accelerate the country’s transition to renewable energy and help provide reliability and security for AGL customers during peak periods well into the future,” said Qiao Han Nan, the company’s group vice president.

In response to questions, Maoneng said AGL will have the ability to switch them on and off to generate power with zero notice.

However, the batteries will also be capable of playing multiple roles within the energy market, which include but are not limited to Frequency Control Ancillary Services (FCAS), Energy on Demand as well as the ability to alleviate constraints/congestions within the South-West NSW Network.

It has not yet chosen battery chemistry or supplier.

AGL’s Redman noted that the company is looking at two pumped hydro projects options in South Australia (Kanmantoo) and at Bells Mountain in the Hunter Valley, along with a possible gas firming power station in Newcastle.

It has also developed a virtual power plant program in South Australia with more than 1,000 customers signed up. 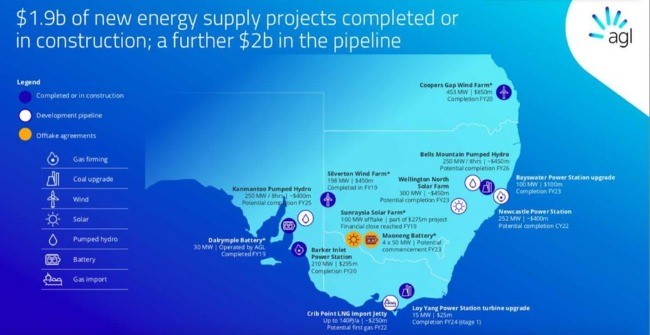 “In addition to this exciting project, we are progressing with major investments in storage and firming capacity, with more than $1.9 billion of new energy supply projects completed or in construction and another $2 billion in the pipeline,” Redman said.