Electricity prices across much of Australia’s main grid rose to record highs in the first quarter of 2019, the Australian Energy Market Operator notes in its latest quarterly report, and it puts the blame on the record heatwave, rising coal and gas costs, and the rising cost of hydro power because of the drought.

AEMO, in its latest Quarterly Energy Dynamics report, notes that the March quarter was the hottest ever – for temperatures across much of the country (see Figure 1 below), as well as for demand, and for wholesale electricity prices.

The cause of this? Not renewables, says AEMO. In fact, it notes, demand – and presumably prices – would have been significantly higher were it not for the growing penetration of rooftop solar which reduced peaks and operational demand.

The drivers of high underling energy prices, as cited by AEMO, were:

Those record breaking heat – both in peaks and in the average over the quarter – drove a significant increase in demand as consumers turned to their air-con systems for relief – across all parts of the day.

The underlying demand driven by this use of air-con units was an average of 515MW, but the grid had to only deal with an average increase of 243MW because of the impact of rooftop PV generation. 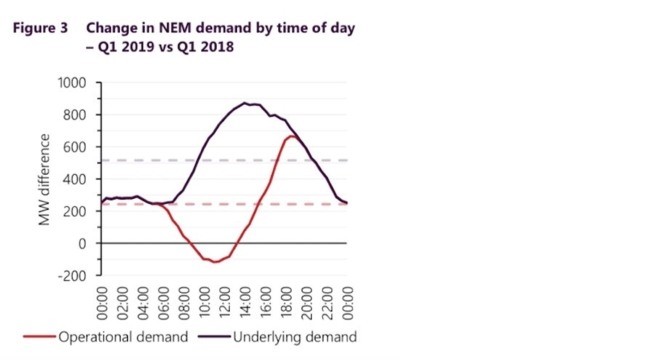 Figure 3 shows how this reduced demand significantly throughout the daylight hours – traditionally where demand used to peak. AEMO notes that despite hot weather, maximum demands in all regions apart from Queensland did not reach record levels due, in part, to increased output from rooftop PV.

The increase in coal and gas costs is significant – particularly in the light of a political debate which still turns on the false assumption that coal and gas offer the cheapest costs of generation.

Numerous studies say this is false, and it seems not only in the case of new generation, but also in the case of existing plants. This is reflected in the record level of “underlying” prices in the wholesale market.

While some of the headline prices – such as the average of $166/MWh and $163/MWh for South Australia and Victoria – were driven by huge pricing peaks in the midst of the most extreme heatwaves, and the failure of many coal units, AEMO notes that for more than half the time over the three month period, the spot price in Victoria was consistently above $100/MWh.

This was caused by hydro, coal and gas plans all switching much of the bidding (in other words, their “baseload” price) from less than $100/MWh to more than $100/MWh. For coal, this was driven by “quality” issues, and gas by higher prices.

For hydro, this was driven by reduced water levels due to the drought.

AEMO says the market appears to be pricing in for thermal coal prices to remain comparatively high into 2020, which has the potential to influence offers from coal-fired generators. This is reflected in the electricity futures markets.

Also weighing on the market, and pushing prices higher than where they would otherwise be, are the low water levels in dams, affecting hydro storage, high wholesale gas prices, and concerns over delays to connection of new renewable projects as well as the impact of grid congestion.

There was some good news in energy markets during the quarter. Costs in frequency markets (FCAS) dropped as battery storage displaced coal generation in that market.

The amount of wind output curtailed due to system security issues dropped significantly – to just one per cent of total output in the most affected region, South Australia.

And prices for renewable energy certificates also dropped significantly (30 per cent in the spot market) thanks to the huge investment in new wind and solar farms that will see the renewable energy target for 2020 met easily.