Prices of electricity in South Australia are tracking lowest in nation on the spot market for the second month in a row — but consumers will have to wait before seeing cuts to their bills.

So far this month, SA’s average wholesale spot price is below $35/MWh – less than half the price in NSW and Victoria.

This follows October when SA was the cheapest in the National Electricity Market.

The lowering price is in part thanks to the third of SA households with rooftop solar panels, and wind farms bidding low in the market.

“This is the early sign of price relief that should flow through to contract prices,” Grattan Institute energy analyst Guy Dundas said.

“We are starting to see the benefits of a supply response with wind and solar.

“On average there is a sustained downward trend.”

He cautioned against overselling the impacts but said it was “a big change from continually increasing prices”.

Adelaide consultants CQ Energy said several factors were reducing prices in the medium term as well as windy and sunny days at this time of year causing surplus generation.

“The gas price has fallen a bit which is good,” CQ managing partner Reza Evans said.

“And we’re seeing a lot of the newly built renewable energy come on.”

Wholesale prices make up about 39 per cent of an average household bill in SA, according to the Australian Competition and Consumer Commission.

Getting electricity delivered from generators to households — the transmission and distribution components — make up 37 per cent and are high in SA because of the sparse population.

Retail costs and margins are 11 per cent of the bill and environmental schemes 13 per cent.

“These lower prices are promising, but additional storage is essential to bring down electricity bills throughout the day and throughout the year,” he said.

Most household electricity contracts are structured to smooth out the differences in spot market prices which can vary by hundreds of dollars within a day, let alone a month or a year.

Monthly wholesale spot prices also are likely to soar in January and February when consumers crank up air conditioners on hot days.

In January this year, SA’s average spot price was $241/MWh, with Victoria the only state with higher prices.

Nonetheless, SA’s prices are going down with the Australian Energy Market Operator’s September quarter report published on Tuesday finding the spot price was zero or negative in SA 8.4 per cent of the time. 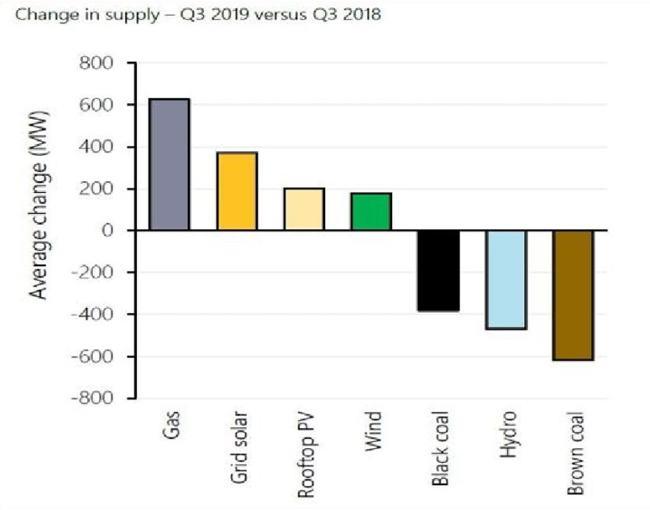 The mild sunny days also have led to SA setting another record low for demand on the electricity grid — the fourth record this year.

The Australian Energy Market Operator said the successive records this year showed how the electricity system was changing.

“While these new records are certainly attention grabbing, that does not mean they’re without challenges,” AEMO said.

“The increasing contribution of behind-the-meter resources to our power system has meant that managing key system requirements, such as frequency and voltage, can become more difficult.

“As our industry continues to rapidly transform, we’re expecting more broken records (not just in South Australia) and further developments within our power system.”