In our latest Australian Electricity Outlook (AEO) for the National Electricity Market (NEM), published on Thursday, we present our expectations for LGC and wholesale electricity price development in each region of the NEM over both medium-term (four years) and long-term horizons (20 years).

Modelling considers a Central Case for electricity price development in line with RepuTex’s view of the current transition of the energy industry and market drivers, along with an Alternative Case reflecting AEMO’s “Step Change” shift to renewable energy, accounting for faster coal closures, technological improvements and more aggressive action on climate change in line with a “well below 2°C” Paris climate commitment (to achieve net-zero emissions prior to 2050).

In this article, we present a summary of our modelling outcomes and the implications for regional price formation over our medium- and long-term forecast horizons.

Although utility-scale solar and wind projects are being built at an impressive rate in the NEM, the final step of delivering electricity into the grid is experiencing major delays in some Renewable Energy Zones (REZs), such as North Queensland and Victoria’s Western and Murry REZs, due to inadequate grid infrastructure.

While around 2-3 GW of new wind and solar is committed to enter the NEM, three interrelated barriers have limited the further deployment of renewable energy:

Recent plans to support the development of transmission infrastructure to key REZs via the Victorian Renewable Energy Zones Development Plan and the New South Wales Electricity Infrastructure Roadmap are likely to play a key role in overcoming constraints that have plagued the market in recent years, committing Australia’s largest states to the acceleration of the long planning process involved in building transmission infrastructure (both between regions and to each state’s best REZs).

Overcoming arguably the largest barrier to the uptake of renewable energy has the potential to lift the handbrake on renewable energy development, while resulting in a significant change to the speed of the transition from coal to renewables under our forecast scenarios.

As this occurs, a tsunami of large-scale renewable energy is likely to enter the market over the forecast period, with almost 7 GW of firmly announced large-scale wind and solar projects to be added – growing to over 60 GW through to 2040.

This would see around 13 GW of black coal capacity exit the market by 2040, along with 1.4 GW of brown coal capacity. 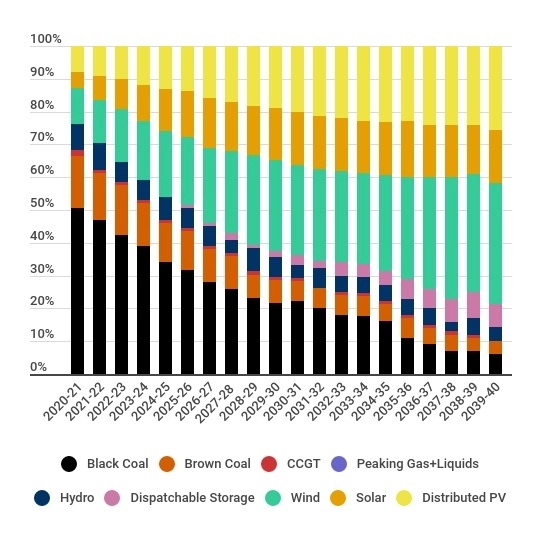 Modelling indicates that this additional generation will continue to shift supply curves to the right, increasing competition for dispatch and reducing the influence of gas prices, resulting in lower annual average wholesale electricity prices.

In the near-term, this is most evident in Victoria, which is forecast to see falling electricity prices that could persist until brown coal units begin to close.

Low fossil fuel prices, along with the continuing softening of daytime demand, are anticipated to keep electricity prices lower over the medium-term with prices stabilising around current levels, between $40 and $50/MWh.

Longer-term, the uptake of renewable energy is forecast to maintain downward pressure on wholesale electricity prices though the 2020s, with annual average prices potentially closing in on $35/MWh later in the decade should the market continue to be oversupplied ahead of expected coal closures between FY28-35.

The second barrier to the uptake of renewable energy – low electricity prices – is therefore expected to continue to persist in our Central Case, due largely to the continued operation of coal-fired generators, and the oversupply in the market.

While the risk of early coal unit closures is appreciable, history suggests that coal-fired units could fight to remain available until their expected closure dates in order to avoid a ‘first mover disadvantage’.

This is particularly the case for large coal-plants with deep-balance sheets, that may wait-and-see if they can outlast their competitors and capitalise on higher prices to return to profit, while deferring considerable early decommissioning costs.

In response to changing conditions, coal plants are therefore left with two options: shut down, or change their output. Many coal units are therefore expected to be forced into more flexible operation to better follow daily demand patterns.

Coal plants were not originally designed to operate as load-following generators. Operating coal units in this way can lead to efficiency losses and high ramp rates, along with physical issues, which can further ramp up operation and maintenance costs, and/or lead to increased plant outages.

Despite this, the first mover disadvantage – where the first unit to close loses out on improved profitability – provides a key incentive for innovation and more flexible operation.

As this occurs, our modelling suggests the market will continue to be oversupplied, keeping annual average prices lower, until coal shutdowns begin to occur.

While the recent drop in gas prices has led to renewed competitiveness for gas generators, this dynamic is unlikely to be sustainable in the long-term as capital and charging costs for energy storage continue to fall, while gas prices have much less room to decrease, and are in fact forecast to increase over the forecast period.

Although the timing is uncertain, this suggests some other form of energy storage will eventually beat out gas for the role of balancing variable renewable energy and ‘bridging’ our way to a clean energy future.

Even if gas prices remain relatively low over the next several years, gas plants are expected to struggle in the new Five-Minute Settlement (5MS) market, which begins on 1 October 2021.

Aside from low fuel costs and well-placed transmission access, gas generators have little competitive advantage in the spot market, where batteries are forecast to emerge as the most economical way to trade, helping to shave peak pricing and reduce ancillary costs such as frequency control.

In addition, the continued operation of more flexible coal-fired generators may further erode the role of gas in providing flexible peaking supply, with potential for remaining coal units to develop their own dispatchable storage, operated to support flexible coal operation, reducing the market for gas-fired generation and new solar projects.

As a result, headwinds for gas are likely to continue to grow from both coal and renewables, until coal-fired generators begin to exit the market.

We forecast that gas output will fall from 7.5% of all NEM generation in 2020 to just 1% by 2030, replaced almost entirely by dispatchable storage solutions.

While our Central Case forecasts downward pressure on wholesale electricity prices though the 2020s, a higher price environment could return if coal units do close early, which is considered in our Alternative (Step Change) scenario.

This uncertainty therefore remains a major obstacle for governments to overcome. With no NEM-wide coordination plan to guide large coal-fired generation retirements and inform new investment in dispatchable storage, investment in new firm capacity is again expected to slow.